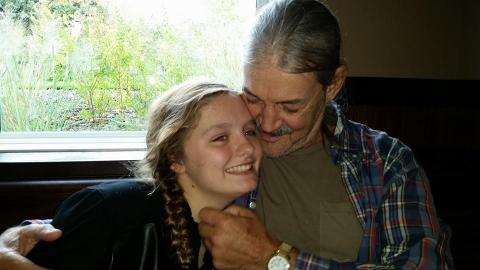 It was the second week of December 2014 in Portland when I called my brother Melvin. I asked him to come stay a few days to help with our Institutes. He never said "No," so he came to help us set up. He was planning to leave early Sunday morning to travel the 90 minutes to his home. I asked him to stay and go to the Christmas tree farm with us. He said his leg was bothering him, but he would go.

We drove in separate cars and stopped for gas along the way. He came up to the passenger side of my car where Juliette was sitting. He knocked on her window. "Wanna go in the store with Uncle Mel?" She beamed and jumped out of the car. A few minutes later she returned with a big smile--carrying a soda and a bag of chips, things I never buy for her. Melvin looked at me sheepishly. "I can't tell her no," he said.

We drove on to Sunny Day Tree Farm. They had a barn set up with a fire and rocking chairs. Melvin sat down. "Donna, I am not going to walk around the farm. My leg is hurting. I'll be right here." We found our tree, had hot chocolate, and said our goodbyes. That was Sunday.

The next day his fiance Laura called. She told me she had taken him to the emergency room because his leg was causing him so much pain. They gave him a prescription for muscle relaxers and sent him home. On Tuesday, she called again. She said he was in so much pain that he was in tears, so she took him back to the emergency room. The doctor told him to give the muscle relaxers time to work and sent him away. Wednesday she called again. She had taken him to a different emergency room because he could not stand the pain and was delirious. The doctor gave him a prescription for pain pills and sent him home again.

On Thursday, I was finishing the last day of the Beegle Poverty Coaching Institute. My brother Rick was helping with the institute. I could see him pacing in the back of the room. As soon as I graduated our new Coaches, he pulled me aside. He handed me a phone and said I needed to talk to the person on the line. A woman's voice said, "I am Dr. so-and-so, and I am caring for your brother." She went on to tell me that she had done her best to stop an infection. She told me that she had cut his leg all the way up to his torso, but the infection was traveling faster than she could cut. She concluded that there was nothing more she could do, but keep him comfortable until he passed.

I was in shock. Just four days before, we were at the tree farm. I sat on his lap in the rocking chair in front of the fire. Just six days before, on the anniversary of my daughter Jennifer's death, Melvin held me while I cried. He touched my heart and said, "She's here Donna. It's okay." He was my giant teddy bear brother. When poverty was knocking us down, he would hold me and say, "Everything's gonna be okay." His gentle hugs and comforting words always got me through.

He was gone within an hour of my speaking with the doctor. The doctor asked me why Melvin had no medical records. I told her he had never seen a doctor.

Melvin died at 56 with only seven teeth and a lifetime of deep poverty. He never had medical or dental care.

I later found out MRSA is treatable if they catch it in time. I wonder if he had insurance and a regular doctor would he still be holding me and making everything okay?

Several years ago, I went to a picnic at the Oregon Zoo hosted by my employer. That Saturday, I got up--feeling great--excited to have a fun day with co-workers and get to know their spouses and children.

Within a couple of hours of arriving at the Zoo, I began to feel feverish. I could tell something was wrong...but was unsure what was happening. And why it was happening so quickly. When I went to the restroom, I found a small bump on the lower right hand side of my abdomen. It was red, swollen, hot to the touch, and looked like a pimple. I excused myself and started home. But things were just not sitting well with me...so, I went straight to the emergency room. When I arrived, I shared my symptoms with them. They immediately lanced the bump, drained the infection, send material off for a biopsy, and packed the wound. They told me they suspected MRSA, but they would have to confirm once the biopsy was returned. They sent me home with antibiotics and told me to see my primary care physician as soon as possible. I followed up with my doctor on Monday who continued to drain the infection and monitor the wound. I saw him almost every other day until the infection was gone and all the packing was removed. Once the infection was gone, it has never returned. All that is left is a small scar where the wound was.

Such a different experience (and outcome) than Melvin had. MRSA is treatable...if we have the privileges of regular health care and good insurance...and a primary care physician that we trust!