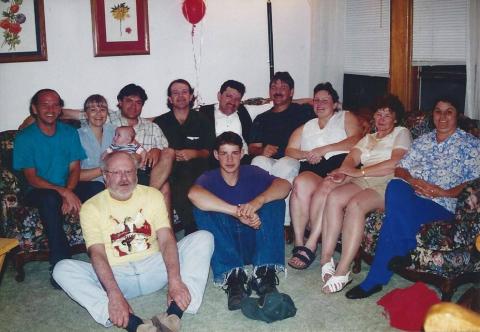 In many of our jobs, we don’t always get to see the impact. I have the privilege of getting evaluations and testimonials about how my research and poverty-informed tools impact people and organizations almost daily. But yesterday, I got an update on an organization I worked with nearly 30 years ago. I wanted to share this story.

In 1990, my brother Wayne was in prison while I was attending the University of Portland working on my Bachelor's degree in Communications. My focus was on how people in poverty were portrayed in the media. My professor and significant mentor was Dr. Bob Fulford. I had told him stories of my brother Wayne, but had never told him that Wayne was in prison. He asked where Wayne lived and I told him the city (Salem), rather than the prison name. A few months later I shared a poem Wayne had written and he asked, "Where is he?" I told him the new city where Wayne was located (Pendleton—the prison had moved him). The third time, I told him a story about Wayne. He again asked where he was. This time I told him a third city (he had been moved again). He said, "I thought you said he lived in Pendleton."

I was trapped. I needed to tell him. Softly, I said, "He's in prison." I waited for the judgment. I waited for the look of disgust. Instead, Dr. Fulford asked, "So, where is he now?" I said, "He's been moved to Portland." He asked, "Can I go see him?" The fact that he wanted to go see my brother meant the world to me.

Dr. Fulford was well known in Portland. He founded the journalism and communication departments at the University of Portland. He had been teaching there for 30 years. He also taught Politics, Rhetoric, and Journalism. Each election season, the media would come to him to analyze political speeches and campaigns so he would be on television. The fact that he was going to the prison was a big deal. The warden came out to talk with Dr. Fulford after he had visited with Wayne.

As we were leaving Columbia River Correctional Institution, Dr. Fulford told me that the prison was having problems with race, class, and gender issues. He said he had told the warden we could probably help. He asked me if I’d like to start a business. I had worked as a migrant-labor worker, in a foam rubber factory, in retail, at Pizza Hut, and at Inventory Auditors. But, I had no idea of what starting a business was all about. However, I trusted Dr. Fulford. So, I told him, “Yes. I’d like to be in business with you.” He explained that people play different roles in businesses. Then, he asked me what role I wanted. I did not know any roles, so I said the only thing I could think of: “President?”

A few weeks later, he called me to his office. He had a business license for the company called Communication Across Barriers. This was also the name of a course he was teaching that I was taking. The course covered communicating and relating more effectively across poverty, race, gender, and generational differences. He also had ordered business cards. He gave me a box. When I opened it, I learned that I was listed as President of Communication Across Barriers. I felt the power of that title.

At the end of our training, prison staff told us that during this training they would forget who was in prison and who was employed there. They came to the realization that once you sit down with someone and have honest communication, you realize they are a person who is not so different from you. After five years, we received a report that none of the people in our pilot program had returned to prison. This is even more significant when you consider 83 percent of people who get out of prison end up going back. Our program worked. Not only did it assist the people in prison, it transformed the prison itself. Columbia River Correctional Institution

Columbia River Corrections now has dorms, not cages. It focuses on preparing people to earn a living and get the help they need to live productive lives. The majority of people in cages in America can not read at an 8th-grade level, and they are overwhelmingly from poverty. Dr. Fulford and I laid a poverty-informed foundation for building a humane way to assist people in getting the help they needed to succeed.

Yesterday, I was talking with a friend who has been doing some work with Columbia River. He described how different Columbia River is from most prisons he has seen. He said, “They actually care about the people there. They are working with people to remove barriers and to get the skills and education they need to succeed.” He was stunned by the “college” atmosphere of the prison and how people are treated. (Read this article that describes the best practices Columbia River Corrections uses to be humane and actually set people up for success when they are released.)

I had not thought about the Columbia River Prison for years. I doubt most of the employees there know this history or even why they are so different than other prisons. Many of the organizations I have worked with have incorporated the poverty-informed practices I teach in a manner that it becomes "just the way we do business." Caring becomes the norm. Going above and beyond to remove any barrier you can is everyone's job.

I thanked my friend for the update. This update make my heart happy!